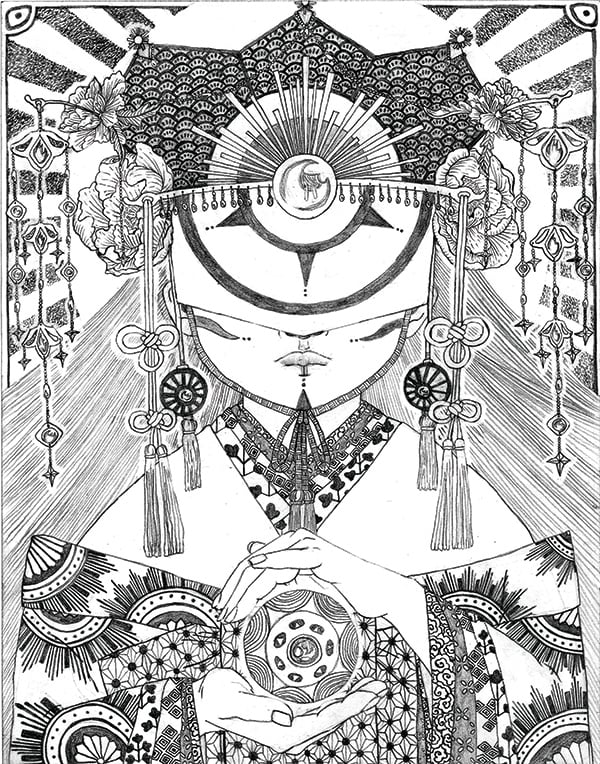 Deity of the Sun. Ruler of the Heavens. The eldest sibling of Tsukuyomi and Susano'o, first of the "three noble children". She was born when his father, Izanagi-no-Mikoto cleansed himself of the taint of the underworld after he visited his undead wife, Izanami-no-Mikoto, and narrowly escaped her enraged clutches. Amaterasu was born when Izanagi washed out his left eye.

Amaterasu and her brother, Susano'o had a contentious relationship. Her brother once insulted Amaterasu that she had no power over the higher realm and challenged her ability. Susano'o promptly lost to Amaterasu. He threw a tantrum, destroying Amaterasu's heavenly and earthly realms, including her prized rice fields, and murdered one of her beloved attendants. This rampage disgusted Amaterasu, and she went into hiding in the "heavenly rock cave (Awa-No-Iwato)" to tend to her grief and fury. As a result, the world fell into darkness and chaos.

Amaterasu emerged out from the cave only after a banquet was held in her honor and the Goddess Ame-no-Uzume performed a ritual dance. After this incident, Susano'o was banned from the heavens. The two siblings eventually amended their conflict, and as a token of their reconciliation, Susano'oo gifted Amaterasu his prized sword, Kusanagi-no-Tsurugi. Amaterasu uses this sword to maintain balance and harmony within the heavenly and earthly realms along with two other talismans, a mirror and a jewel.